As most of you know, I live on the slopes of Mt. Fannie, a small mountain that is 7,152 feet high. It’s named after the first woman to reach the summit.   This mountain stood in majestic silence as the pioneers crossed the Oregon Trail and settled at her feet.  It was not an easy feat.

I was reading some historical papers at the library about the early settlers, including Fannie.  I had to laugh out loud when I noticed that the old document had been annotated in pencil, with the word “wild”.  Mrs Frances Jane “Fannie” Cowles Paline, a “WILD” widow.  Who, from the late 1800’s, would have added the word “Wild” to Fannie’s description?  A prude that did not approve?  We will never know.

Life was hard for Fannie.  Her mother died in childbirth, and she lost her father and husband in the war.  She sold everything they had, and along with her brother and her uncle, headed for California.  As they neared the Rocky Mountains, they were attacked by Umatilla Indians and lost everything, including 17 horses. At least they didn’t lose their lives, as was often the case.   A short time later, Fannie’s brother died of Rocky Mountain Fever.

They spent two months in eastern Oregon trying to earn enough funds to restock their supplies so that they could continue on the journey to California.  But it was just too difficult and unrealistic.  They decided to settle in Cove.

They arrived in the winter of 1862 and set up their camp in a grove of fir trees at the base of the mountain. During that first winter, they dismantled their wagon, using the canvas cover as a tent.  They also used the wood planks of the wagon bed to make a floor for the tent.  The ground was quite muddy and cold at times.

Fannie filed for and received Homestead Rights and property. She was the first woman in the area to do so.  (Such a wild woman.)   She, along with her uncle, started raising cattle, farming, and planting an orchard.

It was in honor of Mrs. McDaniel that the mountain behind Cove was named “Mount Fannie”.  She was the first woman to have climbed it. The ascent was made in June of 1863.  Such a wild woman!  I imagine, but I don’t know for sure, that there must have been days that she even wore pants, instead of dresses.  Not many women of that era would have approved.

Mr. McDaniel and her uncle formed a partnership which continued for many years, and the two men engaged in stock raising, operating a flour mill and a general merchandise store. They also planted extensive orchards.

During this time EP also built a beautiful residence for Fannie and their family, which was surrounded with lovely ornamental trees and flowering shrubs.  Fannie took great delight in her flower garden, filling it with rare flowers.  She would make fancy flower arrangements and place them throughout the house.   They went on to have six children, and were very prosperous.  I would like to think that they lived happily ever after, that wild woman and her husband, EP.

************************************************
The Theme for this month’s Blog Train is “Celebrate Good Times”. Many of the designer’s focused on New Year’s Celebration, and I just designed a more general kit.  I don’t go out on New Year’s.  Guess I am an old Fuddy Duddy, but I just feel safer and more comfortable at home.  We watch the ball drop on the TV, and have snacks.  That’s about the limit of the excitement in our home.  Truth is, we spend most of our time calming our dogs who are terrified of the fireworks happening in the neighborhood.  Murphy has a “Thunder Shirt”, but it doesn’t really help all that much.  My Husband usually has all those big dogs surrounding him on the sofa, as he keeps them snuggled up and calm.  A big lab, a big german shorthair, and a fat pitbull. 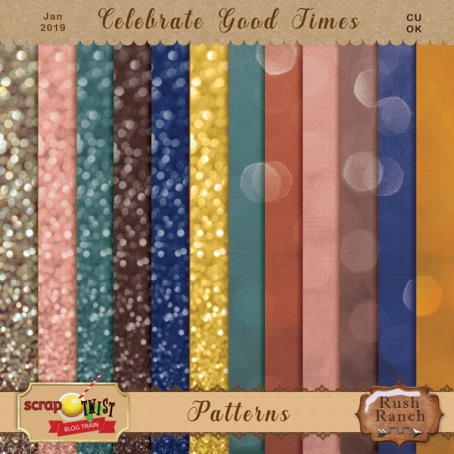 And, if your come and participate in the forum challenges at Scraptwist Free4All, you will receive these small kits, for free.  Nothing to buy.  You won’t be directed to another page, you won’t be asked to buy anything, you don’t have to buy a membership –  just finish the challenge (usually a layout), and then you will be sent a private message with the download link for the bonus kit for that challenge.  I’d love to see you in one of my challenges that I host.

Have a very special start to the new year!